Long-distance road cycling is partly an endeavor of 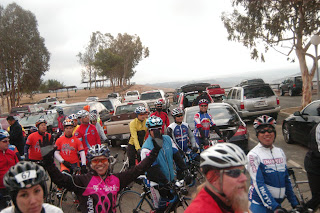 Hypothermia? Who cares. How do I look in the photographs? For example, on Dec. 1st, 2007, ninety-two cyclists (and dozens of supporting volunteer) arrive at a hilltop parking lot to start a 100-mile bike ride. The object is to test their fitness against distance, the elements, and each other. (The event is Stage 3 of the 2nd Annual Tour de Francis, a hundred-mile bicycle ride.)


On this frigid morning, the cold penetrates their flimsy cycling uniforms. It is 40 degrees Fahrenheit at 6:30 in the morning, and breezy. 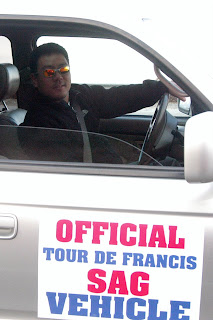 Paradoxically, their only protection from the wind and cold is cycling-specific clothing fashioned from spandex and parachute cloth. Why? Because it's important to nail the right look.

The kits (that's what the shorts, jerseys, and windjackets are collectively called) are colorful and elegant in their own way (although you would look silly wearing that in the mall). If the riders are shivering in the parking lot, who cares, at least they are fashionable. Never mind hypothermia, as long as they look great in the photographs. But hey, surfers, golfers, and skateboarders are vain that way too.

Mount Everest, anyone? On this day, the peloton (that's what the French call a group of cyclists on the road) will be on their bicycles for 6 to 8 hours, covering one hundred miles over hilly roads and flat roads.
(But for pro-cyclists at the world-class level at the top of their game, it would take only 4 hours to finish this ride. But that's a different story.) 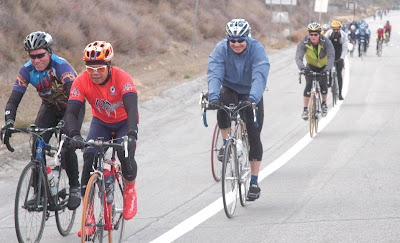 The hills along the Tour-de-Francis route have a combined altitude of 10,000 feet. That's one-third (1/3) the height of Mt Everest. The roads are as steep as 4% to 10% gradients. 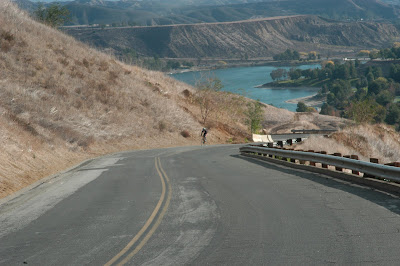 Caloric deficits. Is Jenny Craig in the peloton? No, but she'll be proud. Each rider will burn about 5,000 to 7,000 calories on this ride. They will actually have not much of an appetite during the ride, because of the tension and adrenalin. So each will most likely consume less calories than they burn. The average caloric deficit will probably be 1,000 calories. They will lose some weight today.

Let's put that in perspective: On this very same day, there is college football playing on TV. So there are people at home sitting in front of the TV, occasionally getting up to go to the kitchen or bathroom. That type of activity will burn 2,000 calories. But they will eat 4,000 calories (beer, chips, pizza). So they won't be losing any weight today, sorry Jenny.

Tour-de-Francis and AdoboVelo. The cyclists have come from all over California, as far north as Fresno, and as far south as San Diego, representing 8 cycling clubs. The event is Tour de Francis, so named after its founder and tireless director Francis Marlon Ignacio. The volunteers are themselves cyclist from the Pinoy cycling club AdoboVelo, a proud group. If they can't call themselves the "fastest" club, then at least they'll take the other honor of "fastest-growing" club. 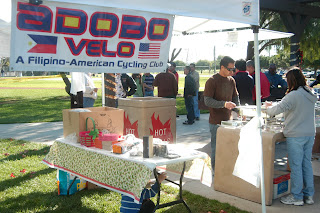 The story of Tour-de-Francis is really is the story of 92 individual riders, and dozens of volunteers. Each cyclist has his/her own drama. Here are some of their stories.

Visitor from a tropical climate: One of the stories, is that of Leian Cruz, visiting from the Philippines, on a business trip to Palo Alto. He has a day job in the Philippines, and for fun he does amateur "executive" races there. He hears about AdoboVelo's Tour-de-Francis ride. His boss is supportive and lets him have the Friday off so he could take the train and join the Saturday bike ride.

On a moment's notice he borrows a bike and clothing. He calls Mang Elpidio Lardizabal (an AdoboVelo cyclist and respected semi-pro) to ask if there is a spare set of leg-warmers to be borrowed. Sorry, none. He emails Rosalie Kneebone (another helpful AdovoVelo cyclist) to ask for self-heating pads. She emails back that she has some, he just has to show up at the starting line.

But on this morning at the starting line, Leian is nowhere to be found. So Rosalie gives the heater pads to a volunteer to hand out later to Leian.

The ride is about to start. Tour director Francis rings the cowbell. There is excitement in the air.

But the peloton proceeds without Leian. Where is he?

It turns out, he and the other cyclists who traveled from Fresno are waiting at the bottom of the hill, 2 miles in front of the starting line. They see the peloton, and merge with them. Leian is woefully under-dressed for the cold. He is wearing summer-type shorts. He has no leg-warmers. No skull cap. He is in a spot of bother. 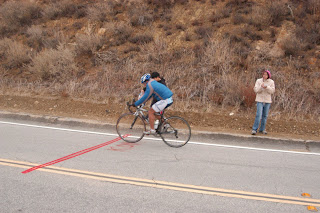 Luckily, the uphill starts almost immediately on Lake Hughes Road. He breaks a sweat, and his core temperature start to rise to a comfortable level. He is strong, and steadily overtaking more riders. Adobos are proud to have this Pinoy visiting. He climbs the hills with grace and prowess.

He crosses the first KOM
(King of the Mountain competition),
at Mile 10, in the top 15%.


But after the hills on Lake Hughes Road, the ride is less demanding along Pine Canyon Road at about Mile 30. And it is windy on this stretch of road.


Now his core temperature starts to drop in the cold weather. The air is 45-to-50 degrees Fahrenheit. Along the route he manages to borrow a parka down jacket, and a sweater from a SAG volunteer (the kind of sweater one would wear in a log cabin).

Leian stops. A SAG vehicle pulls over to inquire. Is he OK? 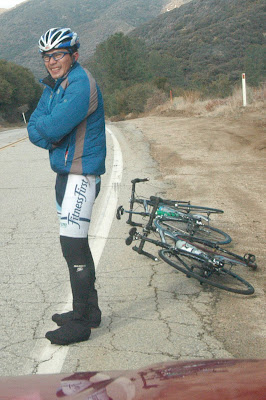 He is just putting on leg warmers. He had borrowed them from yet another cyclist. The SAG vehicle luckily has hand-heaters. He takes them. He gets back on the bike, and carries on, protecting his 15th position in the field, which by now is widely scattered, with a gap of almost 2 hours separating first from last position.

At Quail Lake, the 50-mile point, the hot soup and foodstuff awaits. 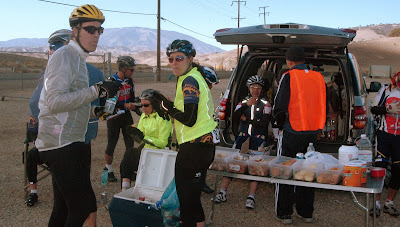 Leian reaches Quail Lake. He arrives 20 minutes behind first place, preserving his 15th position. It is a strong showing. A few days after the ride, he had this to say (here's an excerpt from his email):

" ...I just got back to the office this morning and the memory of that epic ride was so unreal. I have ridden many miles and encountered many difficulties in my 16 year cycling career, but never have I
experienced such a ride! It was awesome! I mean the view, the setting, the preparation before the ride, the volunteers, the riders, everyone was perfect. I personally was not on tip-top condition. We even got lost looking for the start (apologies for that!), but am glad we made it. I can humbly say I have such great stories to bring home to the Philippines. What made this epic ride stand out were the people - They truly made the difference. Despite the 38 degree cold, the warm reception of our folks was so much, that I was able to ride for a further 50 miles...."

(Check back later for the rest of this story, and other stories.)

I was just viewing the pictures hat you took from TDF4. They are great! I would like to thank you for your fine hospitality and many thanks to the whole Adobo Velo members for their support, and of course the wonderful camaraderie that all of you displayed during the entire ride.

By the way, I was the rider on the 29th or 30th position during the 2nd mile on your set of pictures. I actually did not stay at the hotel the night before, like the rest of the MMCC riders, but rather was just coming in from Maui, Hawaii the night before and drove to Castaic during the early morning. Besides the chilly temperature, I
was suffering from lack of sleep, but barely managed to finish the
entire ride. It was one of the most brutal rides I ever participated. I actually rode up to Haleakala Crater on Maui during that week, which was about 10,000 feet. But nothing yet was as difficult as TFD4! Maybe Francis can come up with the "Beyond Categories" route on the next TDF.

Again, thank you so much for your support and the great pix.

Nice pics... you did an excellent job!!!

I just want to provide you with a rider name info...

The number 21 rider in your count is OSCAR SAGALONGOS (# 15 at the First KOM, wearing yellow SBW team kit). He's a So-Cal rider that rides with us in Carson Crit and
also an inactive member of adobovelo. He's a Cat 3 racer with South Bay Wheelmen (that's my other club too). And most important, he was my ride going to Castaic and back home, hehehe! So when he had a mech'l problem with his bike (he broke his rear derailleur cable) and decided not to ride anymore,
I needed to go with him, otherwise I wouldn't have a ride home hahaha!!... We rode with Manolito back to the park and then we left early for Oscar to bring his bike
to the shop.

Thanks Mandy for the support, and your efforts are greatly appreciated.