Part 7: Women of the TdF (Tales from TdF)

Women of the Tour de Francis 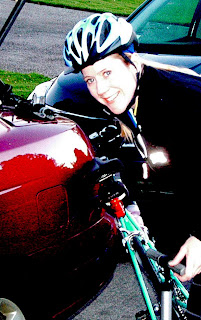 In road cycling, female cyclists comprise perhaps only 1 in 10 riders.

That's why female cyclists get a lot of attention.

Here's a chronicle of the lady cyclists of the Tour de Francis!

2006 DECEMBRRRRR: Tour Director Francis considers the December ride to be "Stage 3" of a year-long Tour.

The TdF ride that take place every February is "Stage 1".

The TdF that takes place every July is the "2nd Stage.

The TdF that is held every December is the "3rd Stage"

Last year, in the Dec. 2nd 2006 TdF, there were 27 riders, of which there was only 1 female cyclist, Mary Elizabeth. Tour director Francis persuaded her it was going to be an easy century. In the photo above is Mary at the parking lot still all smiles.

(What few people know is that before the Dec 2006 Tour, Francis organized two prior TdF's in that year. They were very very small. He was the only SAG car. He had EIGHT riders (yep, only 8). When I get the full story I'll tell you all about it. Like the unknown Beatle, there is the unknown TdF!! )

Many many miles later, as she was struggling up an incline on Pine Canyon Road
(on mile # 60), Francis was taking photos, so Mary Elizabeth gave him the international sign language to show how she felt about the course. 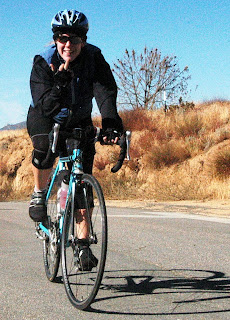 After the ride, she got hooked. 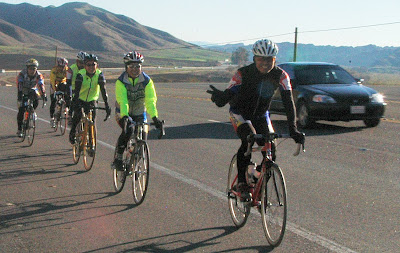 The photo below is at Balcom Canyon (she's on the right in the AdoboVelo kit). With her are Regina (a SAG volunteer) and Vince. 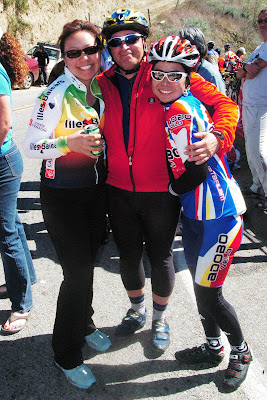 What did I say at the beginning: Female cyclists get a lot of attention in a male-dominated crowd. Below is a rider chatting at Balcom Canyon. Some riders recognized her from the 2007 Planet Ultra KOM series where she finished 4th(!) overall. 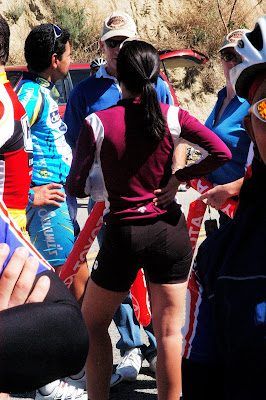 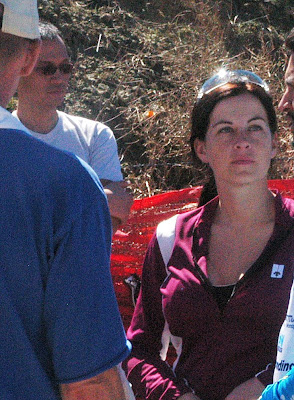 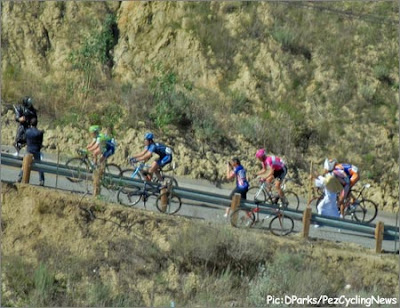 By the way, it was at Balcom Canyon on this day that the Adobos got to meet a pretty and charming cyclist from Moorpark. Her name: Rosalie K. 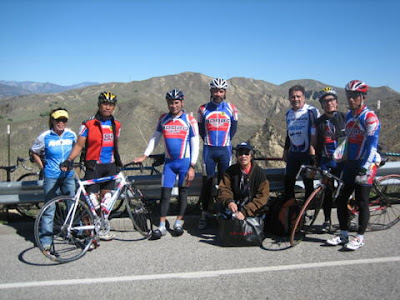 Following the Balcom Canyon meeting, after much cajoling, she joined her first ride with the Adobo boys, up to Crystal Lake (5,000 feet elevation). At the start of the ride, at the Encanto Parking lot in Duarte, she remembers asking Francis, "So how many miles are we riding?

"So where are we riding to?" she asked Francis. He pointed to the top of the mountain. What did she get herself into? She never ridden so high before. During the climb up Crystal Lake, it was hot. While other cyclists were quiet (and breathing hard), she was chatting away, enjoying the view, telling stories. Like it was no effort.

She's now a very active and dedicated member, commuting all the way from Moorpark to Duarte or Cerritos every week for the club rides.

In the photo below is Rosalie on more of AdoboVelo rides, before she got her jersey. This is at Glendora Mtn Rd. 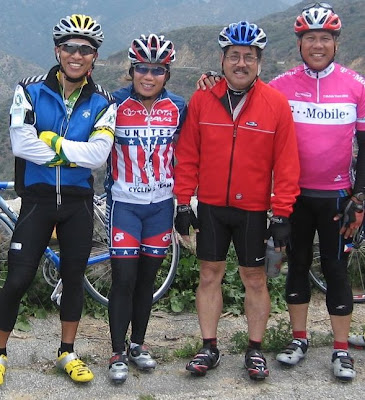 Here's Gloria at the Redlands parking lot getting ready for the ride to Big Bear. 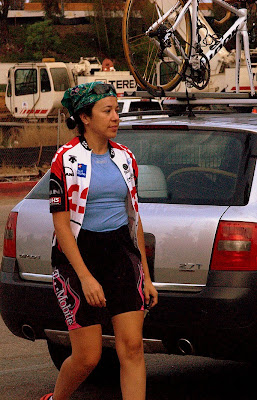 PHOTO BELOW That's Rosalie in front, followed by Cheryl. 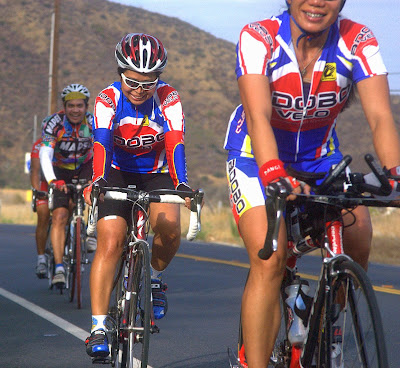 Rosalie was cramping at the SAG stop on mile 24, so she's stretching the hamstrings. 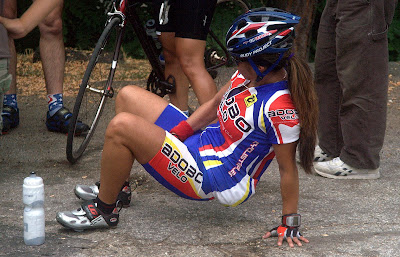 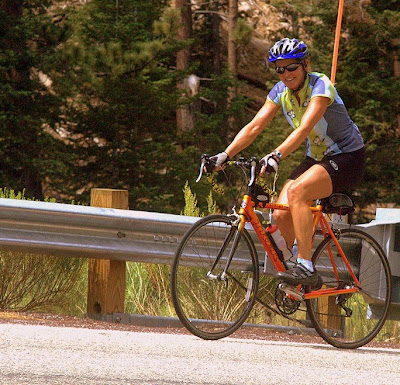 Cheryl and Rosalie at the Onyx Summit SAG stop. 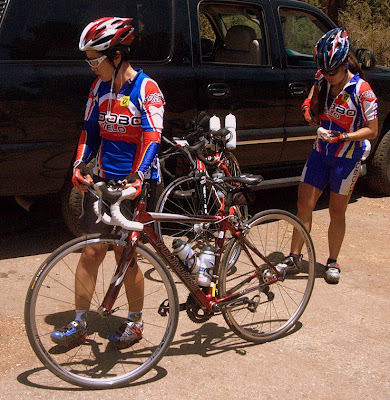 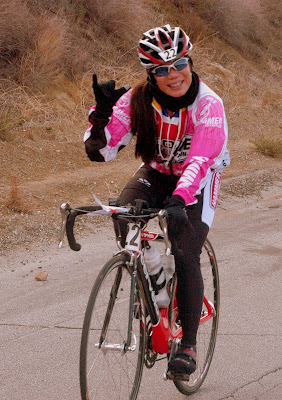 LEFT: Still smiling (on the 2nd mile of climbing)


BELOW: The cold is starting to penetrate. The smile is harder to come by 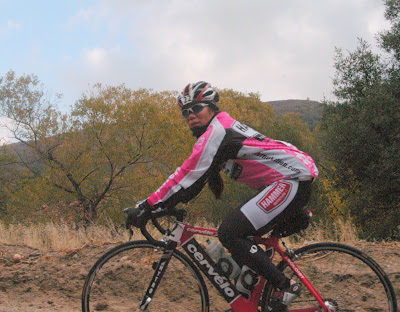 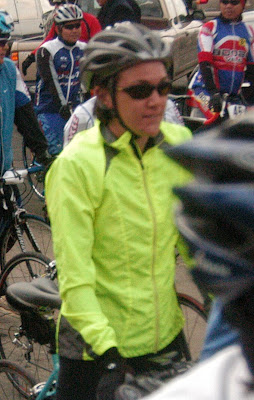 In the photo below is Rachel , 24 years of age.
She achieved many things on this day.
This was her very first century ride.
She also won the award for "Youngest Finisher".
And she also got the award for "First Female Finisher". 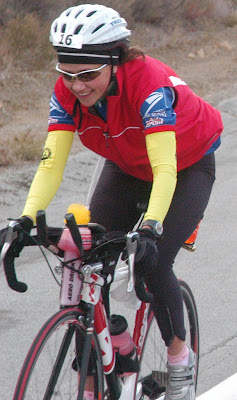 Here's Rachel racing down to Quail Lake just 2 miles away. 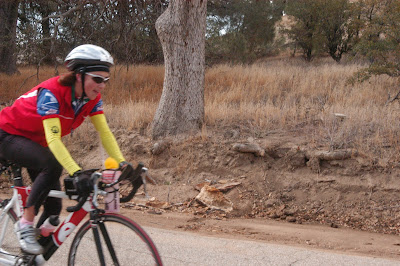 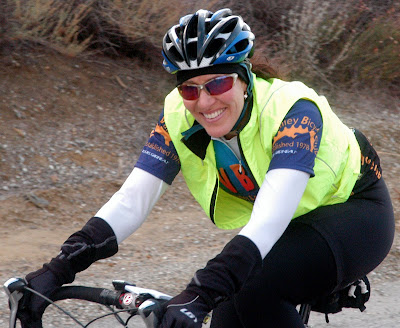 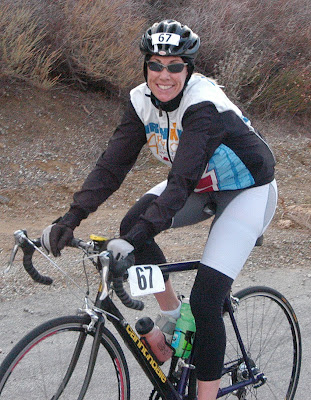 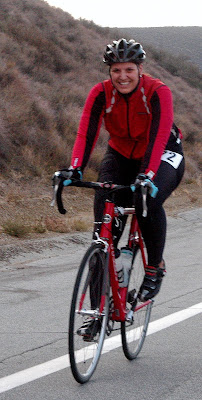 Michelle I. at Elizabeth Lake 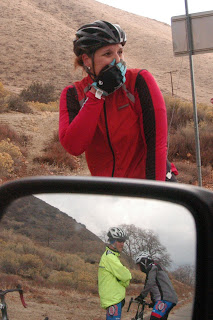 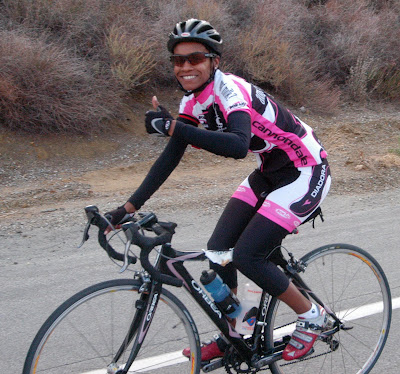 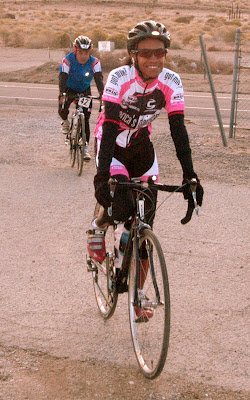 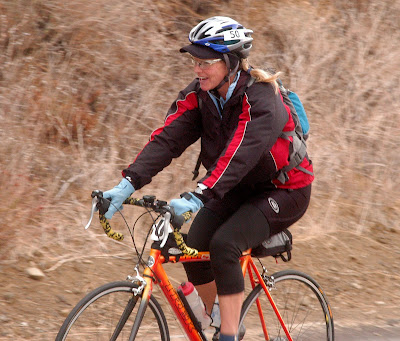 On the left, that must be the daughter of Adobo cyclist Louie Rivera on the right 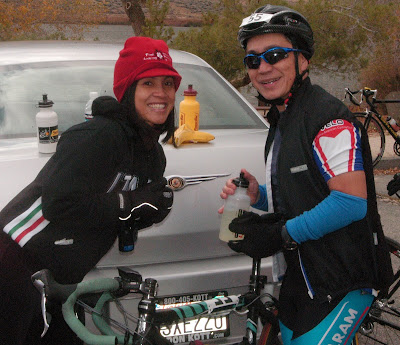 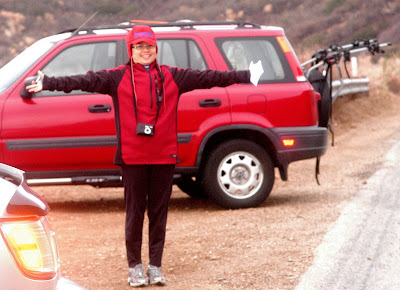 Hey Mandy,
FWIW, the stunning brunette in the two photos at Balcom Cyn (directly below the photo of Regina, Vince and Cheryl) is a young lady by the name of Brandy. I met her during the 2007 Planet Ultra KOM series where she finished 4th(!) overall, beating my time by nearly 30mins(!).
--Afausto