Part 6: Julius the Brave, and Clem the Energizer Bunny (More tales from TdF)

People wonder why cyclists don't just wear ordinary sneakers like everyone else. 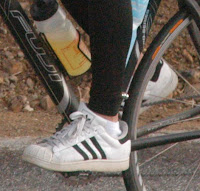 There's a purpose for the silly things cyclists wear, like cleated cycling shoes instead of basketball sneakers.

Off the bike, any fully-clad road cyclist walks clumsily and looks strange. But there's a reason.

The cleats let you transfer power efficiently when pedalling.

but that's precisely so it doesn't flap in the wind, or chaff in areas that rub, which is what happens when you wear basketball shorts, especially in the saddle area.

So the cycling-specific gear gives cyclists an advantage.

Julius de Jesus (Jay) of Siclista club, decided to attempt this ride without those advantages.

JULIUS THE BRAVE. Most cyclists attempt their first century ride choosing a flat course. This is Julius de Jesus' (Jay's) first century ride, a course with 10,000 feet of climbing. He wins the award for bravest rider. This is his story. Jay is with Siclista club in the Fremont, CA area. 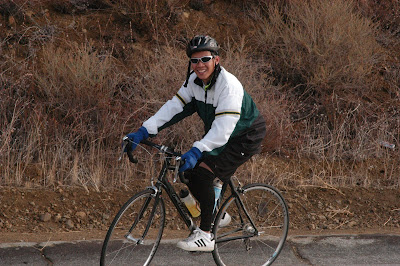 Five months ago Jay purchased his first road bike and started joining training rides with his buddies from Siclista / Luzvimin. Sometimes they would go up Mt. Diablo. Other times, they would take the flat course along the Sacramento river. Jay's longest ride was 40 miles. He's a very likeable chap, full of enthusiasm and cheer. If you are ever in trouble, it is good to have him on your team. So when the club heard about the Tour de Francis, they made sure Jay came along. They told him "It will be fun. We'll ride together. We won't drop you."

I didn't know Jay until I met him for the first time at mile 10 here on the TdF. Here are the circumstances. As a photographer, I feel a responsibility to make sure every single cyclist, without exception, has a photo on this ride. Mile # 10 is the ideal spot to catch everyone. It is early in the course, so riders are still tightly grouped. It is on an uphill, so they approach slowly.

I start snapping photos as soon as the first rider (Raffy) comes through. More cyclists come through in quick succession. Later, the cyclists arrive less frequently. Before the start of the ride, tour director Francis Marlon Ignacio assigns his good friend Emre Udvarde to be the "last rider" . That's not much of an imposition to Emre. He can be last without being asked.

OK, 22 minutes after Raffy (the very first rider across the KOM), here comes Emre up the hill, in neon-green wind vest. He is in 89th place. 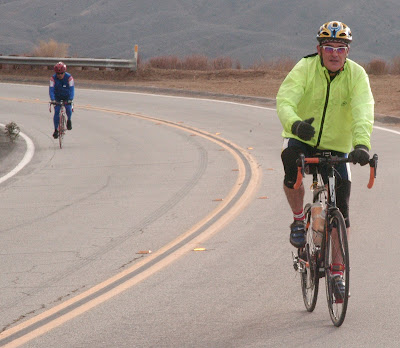 I ask "Are there more riders?". Maybe a couple more, he replies. So I wait some more. Also waiting on the gravel shoulder are my wife, and also Allan Messara, a SAG volunteer in a separate vehicle. His assignment is to sweep up any injured or tired riders.


I don't know who the last rider will be. We wait. Fifteen minutes after Emre, I decide it's time to go. Surely there are no riders left. I tell everyone to pack up and leave. I start to walk to the car.

Ah, but wait, wait. Here comes a cyclist up the hill, followed by another. The first guy is wearing basketball shorts, the loose kind. They scrunch up at the saddle. He's got basketball shoes on. Flat pedals. Nautical windbreaker. And he's all smiles! 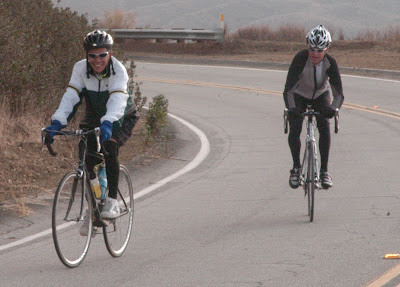 Julius "Jay" de Jesus of Siclista club, and behind is a non-TdF rider

Surely the guy in the Basketball shorts is not with this ride. Who would attempt 100 miles wearing THAT? No, this guy is probably just on a short ride through the hills.

I wave hello. He returns the greeting. He crosses the KOM line, his head is dropped, as if he has just completed a supreme effort. It is 39 minutes after Raffy.

I can't believe my eyes. He's really with this ride? I know some cyclists purposely increase the degree of difficulty by riding a single speed, or worse a fixed gear. This guy does it by wearing non-cycling specific gear. The loose shorts alone will cause chaffing in the saddle area.

Jay turns toward the car. He's going to take a ride in the SAG car. 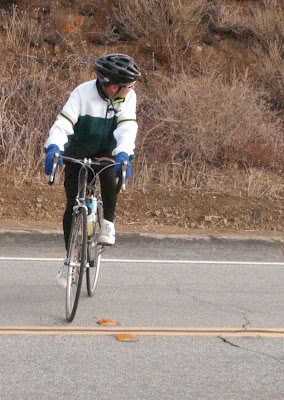 The other SAG volunteer Allan Messara, and myself, introduce ourselves to this rider. Jay is his name. I make sure he is indeed with the TdF ride. Yes, he is.

We assess the situation. Jay is slim, athletic, in his 20's or 30's. He seems fit enough not only to ride the entire course, but even to place well. At this point I don't know him, nor if he's had any training. I check my watch. It is 45 minutes since the first rider. It is only Mile 10. Hmmm. maybe he's not ready to complete this ride.

Jay came along with the Siclista group. He says they arrived late for the registration. They were lost. At Castaic park they were on their bikes looking for the TdF peloton. When they saw the peloton coming down the hill, they just merged with it. On Lake Hughes Road, Jay and his buddies were riding together at the beginning. But as soon as the first attacks came, his buddies responded. Jay could not. He was on his own.

Now, here we are on the gravel shoulder at mile 10. Allan and I check Jay's bike. It looks tuned up (It's a newly purchased bike, but we do not know that yet).

We encourage Jay to carry on. "Look Jay. Up ahead, when you go over the top, there's over 2 miles of sweet downhill. So just keep going. You'll recover. Get your second wind. We'll be SAG'ging behind you anyway. Anytime you need a ride, we'll get you".

So Julius The Brave gets back on his bike, and continues. 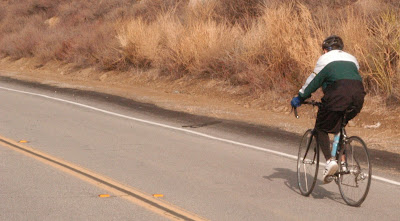 After Jay has gone, we wait some more, because Emre said there were 2 riders to wait for.

SIX MINUTES after Jay, sure enough, here comes another rider.

It is Clemente "Clem" Eustaquio. 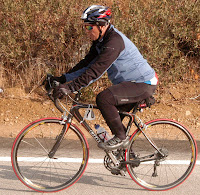 And off he goes, Clem the Energizer Bunny. The last rider on the course. 92nd place. The oldest rider, at age 70+. CLEM EUSTAQUIO. 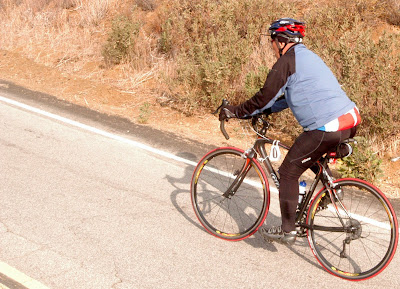 My wife and I get back in the car and drive the opposite direction, to make sure there are no more riders remaining. We drive 2 or 3 miles back over the hilly course. We find no more riders.

So we u-turn, toward the direction the cyclists are headed.

After the KOM hill, we descend, looking for Jay and Clem. We are curious how they are doing. On mile # 15, we pass them. We pull over to see how Jay is doing. He is done. He loads his bike, and gets in the back of our red CRV. And we learn the details of his story. Meanwhile, Clem, the 70+ year old Energizer Bunny, keeps going. We later hear he finishes the ride.

[Stay tuned for more stories from the TdF.]

Also, please change the Siclista location to Fremont, Ca.
Thanks,
-jack i