Road cycling, as a spectator sport, is hard to follow. 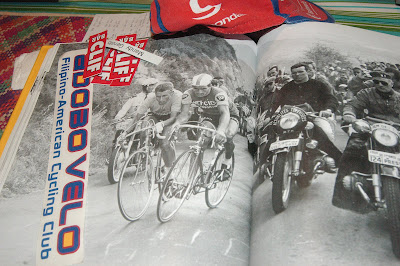 There's no stadium. Competitors are scattered over miles of road. Thankfully these days, live cable TV and streaming webcasts make it easier to follow and enjoy. But this Tour de Francis has no cameramen on motorcycles and helicopters to follow the race. It harkens back to the days before live broadcast TV. Back then, if you were a cycling fan, the race and rivalries were just as exciting and heart-thumping to follow, simply by reading their stories in the newspaper!

Now, back to this TOUR DE FRANCIS: For the first time, organizers host a KOM competition (king of the mountain). In competition are Keith, Raffy, Vance, Deo, Reggie, Allan, and Michael. It is a great story, and even if there is no video, live broadcast or streaming webcast, at least this blog offers the opportunity to retell their story in print and photos. 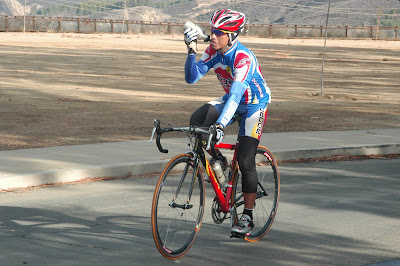 Raffy Soriano (MMCC Mira Mesa Cycling Club), is natural talent. Shy in person, he is aggressive on the road. Keith Brodsky (SFVBC San Fernando Valley Bike Club) is the only cyclist able to stay with Raffy the whole time. Keith observes that on the flat roads, Raffy's slim frame slices through the wind as he stands and hammers his pedals. On the uphills, Raffy is observed by another rider, Mang El Lardizabal (AdoboVelo), himself an accomplished rider, who says that Raffy floats up the hills without effort. Keith is older, has a bigger frame, a bigger "motor".

After 2 miles of climbing on the very first hill, here's Keith (2nd from left) and Raffy (rightmost) staying with the contender group.

Keith and Raffy are evenly matched throughout the ride. When one of them eases up, so does the other. When one attacks, the other jumps and responds. Keith is in front most of the time, but Raffy takes over on the climbs.

Approaching the first KOM on Mile 10, Raffy is in front of Keith. 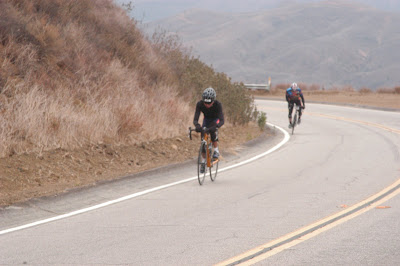 
Fast forward to Mile 55. The race changes a little bit. On the Third KOM again Raffy and Keith take 1st and 2nd respectively (with Keith again 10 seconds behind; He has not won a KOM yet, as Raffy has taken them all!)

But now in third is Vance MacDonald (SFVBC), now 35 seconds back of fellow club cyclist Keith. 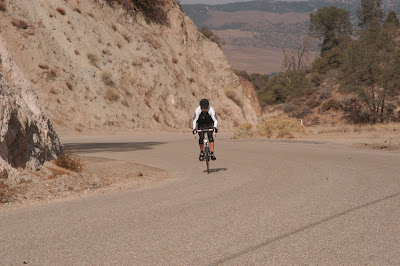 The top three are chased by a group containing ADOBOVELO's lone contender DEO ASCUNCION (Philippine Olymic cycling team member in the 1980's), who during the entire race is surrounded by the orange jerseys of the MMCC boys: Approaching the KOM are Reggie Ignacio (Bib# 64), Allan Recudero (Bib# 63), Deo, and Michael Nepumoceno (bib #60). The group will stay intact throughout the rest of the ride. 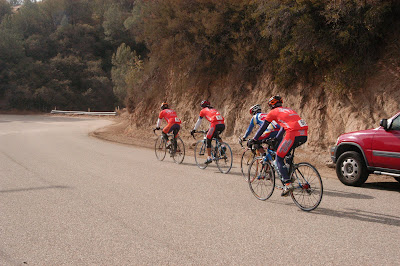 (There is more to tell, but time's up. Please stay tuned for the rest of this story, plus other stories from the TdF! Check back later. )