Road cyclists, Harley bikers, and drivers in convertible cars, share at least one thing in common: They like riding asphalt while exposed to the wind, slicing through it like a bird in flight. They like it even better if the roads happen to be lightly travelled rural asphalt roads, surrounded by hills and trees. Such is the route chosen for the Tour de Francis' "Stage 3" traditionally held in December. (The other two other stages are held in February and July, respectively). 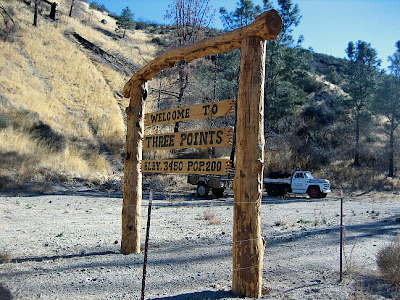 There are hardly any shoulders for cars to pull over. The hills are rolling. 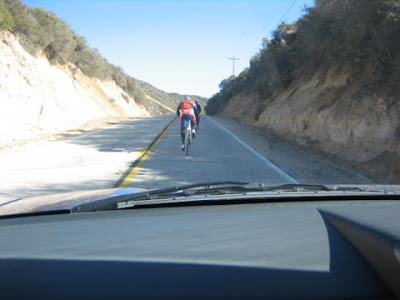 There is no one on the road. It is best for a cyclists to travel in groups, if you can hang on to one. 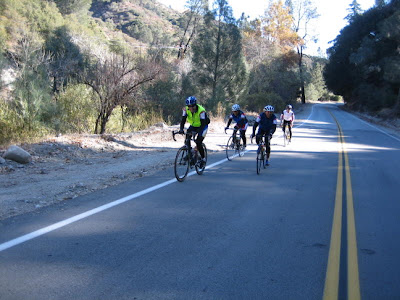 The rest stop at Quail Lake, 50 miles from the starting line, is a desolate, wind-swept, gravel parking lot. It is 5 miles inland from the Gorman exit on the I-5. 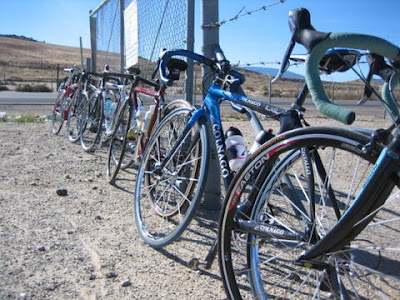 Tired cyclists lean their bikes on the chain link fence, while they get hot soup and a little rest, before they continue their journey. 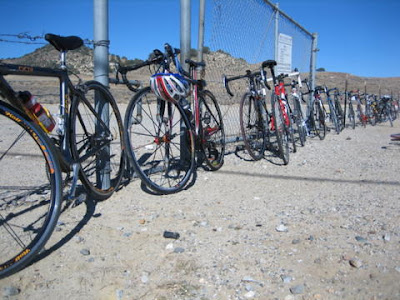 The riders are now returning to Castaic. Keith Brodsky (SFVBC), in his mid-forties, is a worthy rival to the younger Raffy Soriano (MMCC). Raffy is lighter and quicker. Keith is more muscular, and experienced in very long distances. He is known to complete double-centuries (that's 200-miles in one shot, in case you're not paying attention) in just under 9 hours. That means he must maintain an average speed of almost 23 miles per hour the whole time.

Right behind them is Vance MacDonald, Keith's team mate on SFVBC. There's a chase group trying to haul them in, comprised of Deo Ascuncion (ADOBOVELO) and the orange-clad MMCC riders Reggie Ignacio, Allan Recudero, Michael Nepumoceno.

And further behind, trying to limit the damage, are a number of ADOBOVELO cyclists: Ramon Reynoso, Henry Ibasco, William Aligue, Lito Aralar, Elpidio Lardizabal, Moe , just to name a few.

The AdoboVelo volunteers are in a number of SAG vehicles on the road. They are there to pick up tired riders, or provide food/drinks, or fix flats or mechanicals. In the process they are also spectators following the action as they shadow the riders along the winding asphalt roads of Pine Canyon Road and Lake Hughes Road.

The action they are observing is thrilling. But, there is an unexpected turn of events. 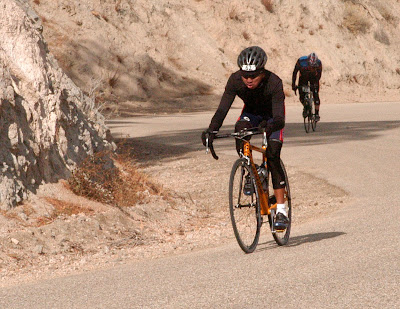 In the final 15 miles, the driver in the red CRV SAG car observes Keith stopping and unclipping from his pedals on the slope on Mile 85. Just three bike lengths ahead is Raffy carrying on, knowing that the 4th KOM is up ahead and within his grasp.

Up until this point Keith has stayed with Raffy, pulling at the front most of the time, although Raffy is quicker in the hills and has taken all three previous KOMs, leaving Keith with none so far. The sight of a rider in contention, stopping on the road, is a sad image, a warrior hanging up his shield and sword. Keith the warrior has seemingly cracked.

The driver in the red CRV SAG car cannot stop because there is no shoulder on the road. So he drives up to meet the other volunteers ahead. There are some SAG cars parked just 2 miles before the KOM. They cannot see Raffy and Keith yet. They get the news that Keith is probably done. They are told that Raffy is now many bike lengths ahead. The competition seems finished now. They wait for the riders to come up. They wait.

The SAG'ers who are now parked further up the road cannot see him. Keith gets back on the bike. He has not really cracked. He has only just pulled a tactic.

Keith knows he only has 2 more chances to get a KOM. All throughout the ride he has been pulling in front, but Raffy is simply quicker and better in the hills. Keith is not sure if he can get even one KOM, but his only chance is to let Raffy do the pacing in front this time around, on the way to the 4th KOM. Back on the saddle, 20 seconds behind, he must close the gap.

Two miles before the KOM, on a slope, the spectators from the SAG cars wait along the shoulder. In the distance, 2 shadowy figures on bikes appear, and grow larger on the horizon. Here they come.


Raffy is first, his pedal action light, his body language confident. As he passes the spectators, they cheer him on. Now seconds elapse as they wait for Keith . 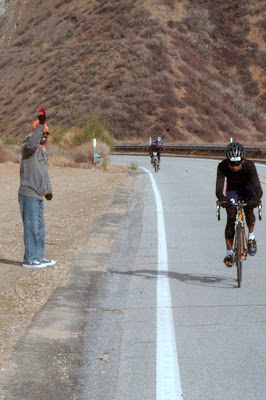 Keith is 20 seconds back. He sways his bike left and right. To the spectators, it seems he is tired. They must be thinking, perhaps Keith has no chance of getting the KOM anymore. They cheer him on anyway, perhaps a bit louder. After all, people like an underdog. 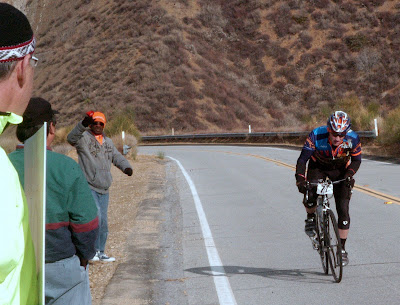 One of them will benefit more than the other from the cheering.

The KOM is up ahead.

The spectators get back in their cars and proceed to the KOM line. More SAG cars are waiting there. The volunteers there get the news that Raffy is ahead and Keith has cracked. They discuss the hows and whys.

The stretch of road is winding, with many blind turns. The spectators cannot see the riders until they turn the corner. They wait on the gravel shoulder.

Seconds turn into minutes. Here come the cyclists. A figure on a bike comes around the corner, followed shortly by another figure. They are shadows, it is hard to tell who is whom at first. The riders come closer, they come over the top. Their faces slowly become recognizable. Who is in front? The spectators soon find out.

Keith! It's Keith. He comes over the top. He takes the KOM. As he crosses the line, he manages to say "I got my first one", his voice fatigued but happy. Only seconds behind is Raffy. The competition not yet over.

There's still the 5th KOM and finish line ahead. A few minutes behind is Vance, 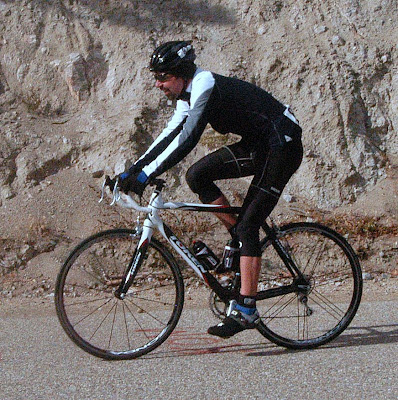 and further back isthe group of Deo and MMCC riders Reggie, Allan, Michael.

And further back are AdoboVelo riders Ramon, Henry, William, Lito, Elpidio, Moe and others.

(Stay tuned for the rest of the story)