5 guys, a minivan, and Francis 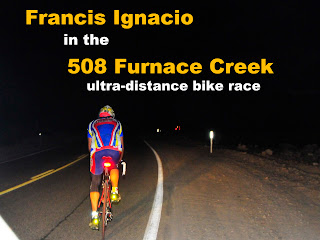 This is the 508 Furnace Creek Race, an annual ultra-distance bike race through the Mojave desert. The number “508” stands for the number of miles they will bike, straight. 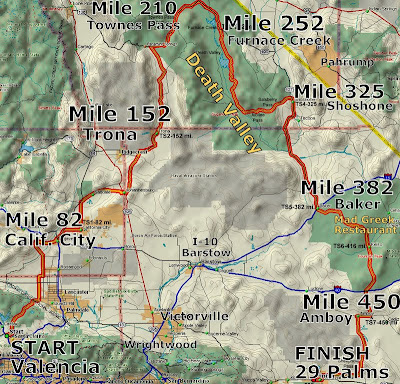 They started out at 7:30 AM on Saturday , Oct. 4, from Valencia CA (near Magic Mountain), and headed for Death Valley in the Mojave desert. They will finish in the city of Twenty-Nine Palms. 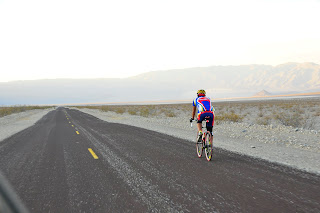 Francis isn’t going to win this race. The top leaders will finish the race in a time of 30 hours (the record is 27), while Francis is TRYING to best his time of 43 hours set two years ago.

Like the 300 other entrants who have little hope of placing in the winner’s circle (except of course the elite entrants), Francis is in this to conquer his own personal Mt Everest. Each of them has his/her own mountain to vanquish.

Take for example the story of the pretty female cyclist pictured below. She has a name of course, but her team's name is "Aye-Aye" (a type of lemur, a rat-like creature, native to Madagascar). So during the race we would say , "There goes Aye-Aye."

The support crew in the van that was following Francis was so enamoured of her beauty. But little did they know (until after the race and they read articles about the various participants) about the physical hardships Team Aye-Aye had to overcome. 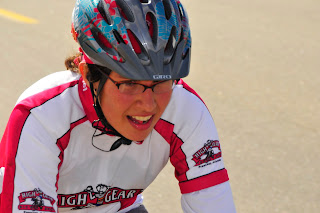 In her blog, she says she has epilepsy (an incurable disease that causes those who have the condition to suffer unpredictable and uncontrollable convulsions). According to her blog, she hasn't had an episode for perhaps 4 years now, thanks to some wonder drugs that keep the disease at bay. But she never knows when it will strike. (For more about her story, see Doubt-Kills-Dreams. )

That is her Mt. Everest. I guess you can say this race is her way of willing the disease into submission.

Early in the race she "dropped" Francis (in English, she was faster and stronger and raced ahead.), but later Francis caught up and steadily increased the gap on her. 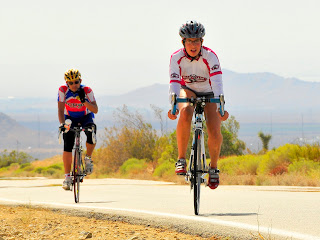 The procedure that Francis established for his support crew, was to stop the van 1 mile ahead of Francis, and wait for him to pass, and wait 15 minutes after he passed, and then leapfrog him again, and repeat the process. That way, Francis was never more than 20 minutes from his support crew.

But because of Aye-Aye, Francis's support van waited and waited longer before continuing on, because they would wait for Aye-Aye. And then they would cheer her on. Only then would they get in the van and catch up to Francis.

Poor Francis had little clue what was going on in the back. "Why is the van taking so long? It's been 45 minutes already?"

(More about her story in a later posting.)

The 2009 edition of the 508 will take place soon (the first weekend of October). Now’s a good time to narrate LAST YEAR’s (October 2008) experience.

So here goes the story of Team Picachu, 2008 Edition. 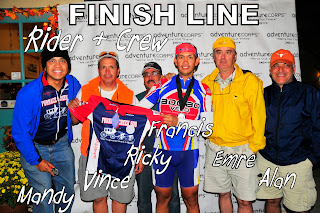 Flashback to the evening of Oct 5, 2AM early morning. It is 20 hours into the race. Ricky, who is driving the Honda minivan at the moment, hadn’t been feeling well all day, but it is his turn to drive, while the others catch up on sleep. The minivan is travelling at a steady 18 MPH on an asphalt road in the middle of the Mojave desert. 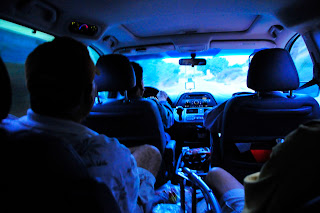 They are following their cyclist, Francis, who is 4 bike lengths in front of the van, and is illuminated by the van’s beam, while all around it is pitch dark . (To state the obvious, the desert is notable for its utter lack of street lighting.) 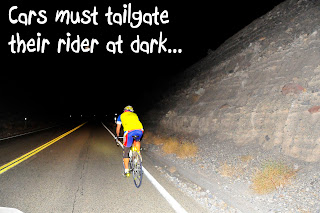 The music is turned off. The windows are rolled down to let in the breeze. The person seated in the front passenger seat is awake to make sure Ricky, the driver, does not doze off, lest he run over Francis.

Their team is named Picachu. The other teams have names like Aye-Aye, Bonobo ape, White Rabbit, Carabao, and Doberman, just to name a few. These whimsical names, which the race organizer calls totems, are in place of race numbers. It’s the organizer’s way of saying, don’t take yourself seriously, this is not the Tour de France. 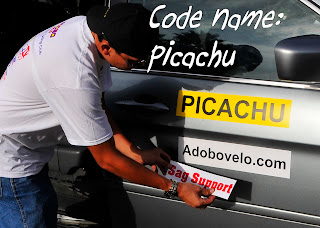 Half the battle is having friends: In the minivan is a crew of 5 guys, buddies really, but of different backgrounds, and therefore the unlikeliest of friends. 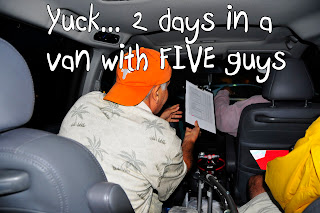 There’s a bus mechanic (Ricky, a Filipino, who is close to retirement age, and dreams of biking endlessly everyday upon retirement), a postal worker (Emre, a Bulgarian with only one good eye), a lawyer (Allan, who is descended from a French Legionnaire, and who speaks Italian and French), an insurance investigator (Vince, a Hispanic, who logs 200,000 miles of driving a year in his job), and a business manager (the other Filipino, and the author of this blog).

If you tried to find 5 compatible guys for a crew, using say match.com or e-harmony, on paper you probably wouldn’t match these 5 blokes.

But friends they are, bound by a common obsession for road biking, bound by the same humor and down-to-earth tastes, and bound finally by a common friend named Francis, the cyclist for whom they are the “support crew.”

Nothing fancy. This is not like being the crew for the multi-million dollar America’s Cup yacht race. This is not the Apollo 11 lunar crew. This is just friends supporting their friend in an amateur bike race.

The word “vicar” (a favorite word that this author learned when he was young) means someone who represents. In the eyes of these 5 friends, Francis is a champ, achieving a feat they only daydream about but could never accomplish themselves. They are living vicariously through Francis. 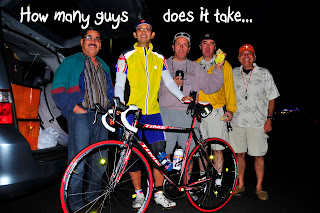 They’ve been cooped up in the minivan for several hours now. If they didn’t get along this would be a disaster by now. Francis cultivated and chose his crew well.

Corny as it sounds, doing this race requires not only extreme physical fitness, but also leadership, to be able to persuade crew members to give up their vacation and family time for this, and to issue instructions to them during the bike race.

Most teams have a crew of two (usually family members). A crew of 2 has to split duties for almost 2 days straight, driving, attending to the cyclist’s needs, with little time to sleep. A larger crew is better.

Now back to Ricky who is driving: At 2 AM , he is getting drowsy. The race organizer has strict rules for night-driving: The van has to have amber tail-lights on the roof, and must at all times be tailgating the cyclist (to protect the cyclist). And no high-beams.

For the cyclist, ideally the team car should be positioned directly behind, so that the road directly in front of the cyclist is illuminated. But Ricky isn't driving that way. 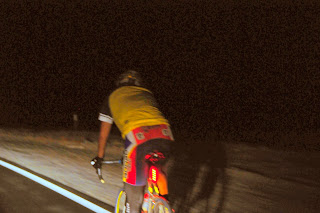 He is self-aware of his growing fatigue. So he does not position the van directly behind Francis, but instead off-set to the left and behind, and he stays further back than normal. That way, if he dozes off, we would drive PAST Francis instead of OVER him. The co-driver notices the situation. It is time to relieve Ricky of driving duties. He tells Ricky to drive up beside Francis. "Hey Francis, we gotta stop and switch drivers."

Scouting Ride for the August TDF PALMDALE to BIG PINES

Putting on makeup and shoes at the starting line. (Francis and Ricky) 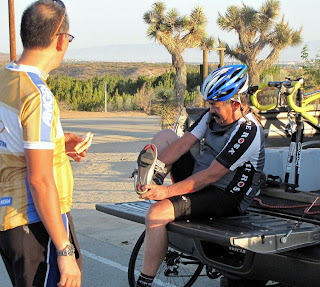 Cactus & Tumbleweed (the vegetation, not the cyclists) at 106th Street. (Jess & Mandy) 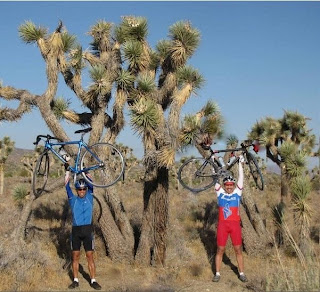 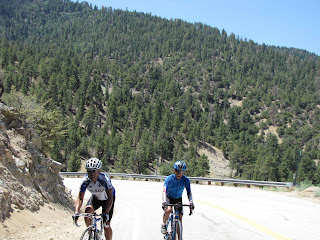 The first 10 miles are easy. Enjoy it. It gets "funner" after that.

Heading toward destiny (Gerald in front; Ricky and Jess follow) 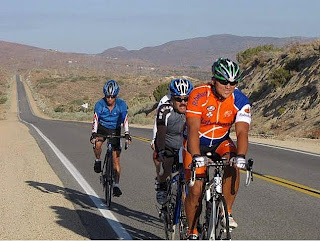 Peloton together for the last time at Fort Tejon Road. When the climbing starts, the group will break up. (Manny, Jess, Mandy, Alan, Gerald, Ricky) 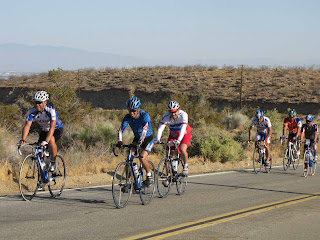 At MILE # 17 you will start the 3-mile climb toward DEVIL’S PUNCHBOWL, an ascent of 1000 feet, with a continuous 9% pitch in the last 2 miles. It's a popular rock-climbing spot, elevation 4700 feet. There’s a porto-potty at the summit, so anyone who didn't get their "morning business" done yet, can do it here. 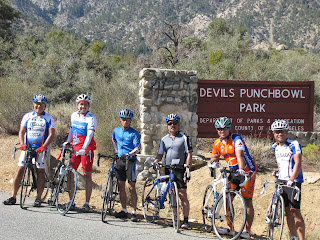 While coasting downhill on Valyermo road at MILE MARKER # 25 or so, you will cross the SAN ANDREAS FAULT earthquake line. If you are willing to stop along this downhill to have your photo taken, it’s worth it.

"Don't blame me, not my fault" says Francis 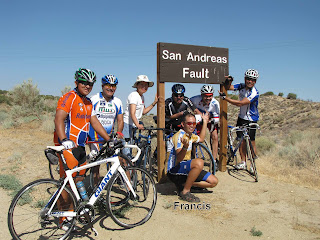 Big Pine Hwy with view of Palmdale below (Alan suffering) 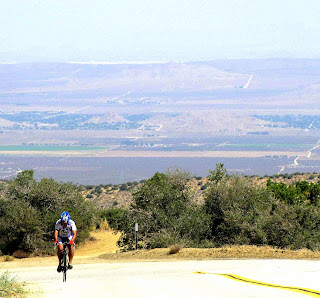 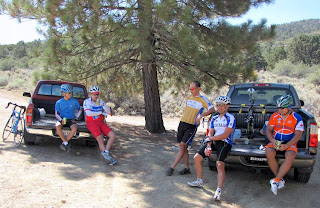 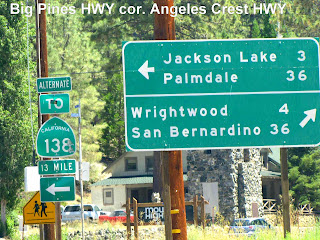 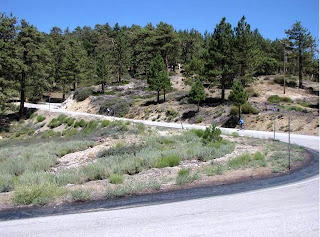 The scouting ride was made possible by the following contributions: Juliet and Francis for SAG'ing and donating provisions. Ricky for lending his truck (while he rode on his bike). Gerald (a Palmdale resident) for collaborating with Francis on planning the route. Thanks to the gullible cyclists who agreed to scout the route: Gerald, Allan, Manny, Jess, Ricky, and Mandy. Oh, and you can blame Manny for letting Francis know, at the last moment, about the existence of a SKI JUMP. The mad scientist Francis rubbed his hands with glee as that hill became a last-minute addition to the route.