Part 4: The Raffy and Keith Show (More tales from TdF)

Lake Hughes road is a 2-lane rural road, 20 miles long, connecting Castaic Lake to Pine Canyon Road. It is scenic and winding. If you are a cyclist on a tourist ride, you have time to enjoy the views. 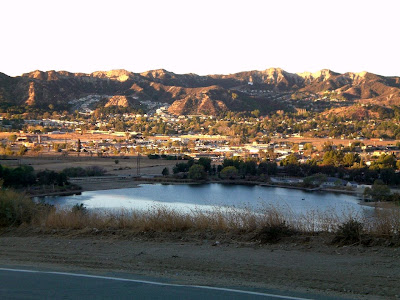 View of the community of Castaic Lake, from Lake Hughes Road

If you are on the Tour de Francis, you are probably not paying attention to the view. Instead you are suffering. You have been on the bike for 5-6 hours. You have covered 85 miles. You are cramping.

Let's continue the story of Raffy and Keith.

Raffy is only 3 seconds behind Keith when they both cross the fourth KOM.

Both riders take stock of the situation. By now they have sized up each other's strengths. Raffy is seemingly lighter and quicker in the hills, having taken the first 3 KOMs by a 10-second advantage each time. A desperate and brilliant tactic by Keith lets him snag the fourth KOM by a slim 3 seconds. He is still a threat. The ride is not over. Keith seems to be the more powerful rider, pulling in front most of the time capable of gaining distance on flats and descents with his massive legs.

Here's what's ahead of them: There are 2 more hills on Lake Hughes Road, then a rewarding downhill ride, and finally, one more obstacle, a 1.5-mile climb to the parking lot.

Raffy and Keith have different strengths. So they use opposite strategies the rest of the way.

Keith bets the ranch. He uses all his energy to attack all the way, with the hope of gaining enough distance before hitting the final 1.5 mile hill, where Raffy has a natural advatage. It is a risky move. It can back-fire if he has no energy left at the start of the final climb.

Meanwhile, Raffy has a tactical advantage. Taking position behind Keith, Raffy keeps an eye on him. His strategy is to reserve his energy and let Keith take the remaining hills on Lake Hughes Road. Raffy keeps reserves for the final climb to the parking lot, where he hopes to overhaul any gap gained by Keith. But Raffy's strategy is as risky as Keith's opposite strategy. Raffy must make sure the rider in front is within his line of sight at all times. With one miscalculation, if he loses visual contact, the gap can grow without his realizing it, until it's too late.

Keith races downhill and slingshots himself into the second hill. Keith is near the top of he hill as Raffy, behind, only now starts to climb it. The gap is 500 yards. Keith goes over the top, causing Raffy to momentarily lose visual contact. This is a problem. In these parts it is easy to lose contact with the leading rider because the tight turns and sudden hills can cut your view.

Now it's on the 3rd hill. By the time Keith reaches the top of it, Raffy is behind by perhaps a quarter mile. Raffy can see Keith when the stretch is straight. Raffy feels the gap is within striking distance. However, as Keith starts the long 3-mile downhill to Castaic, Raffy is only beginning to climb the hill before it. Therefore Keith gains even more seconds. Raffy can perhaps still overhaul that time gap on the final climb, if he only he can regain visual contact with Keith.

Keith reaches the bottom of Lake Hughes Road and (correctly) makes a right turn toward the Castaic recreation area.

Much later, still within striking distance, Raffy reaches the same corner. But he makes a WRONG turn. It is a disastrous turn of events for Raffy, for his club MMCC, and for the Tour de Francis organizers (who now wish, in hindsight, they had larger signs, or a volunteer posted there). Anyway, the damage is done. It is now a foregone conclusion. The competition for the 5th KOM and Overall General Classification is over. Minutes later, Raffy realizes his error, and makes a course correction. It is too late to alter the conclusion.

Spectators have gathered on the finish line, which is a parking lot overlooking the final mile. (ATTENTION READERS/SPECTATORS: IF YOU HAVE ANY PHOTOS ON YOUR CAMERA THAT YOU'D LIKE TO SHARE FOR THIS ARTICLE, OUR READERS WILL GREATLY APPRECIATE IT.)

Keith Brodsky, in SFVBC jersey, crosses the finish line first after SIX hours on the bike, 100 miles, and 10,300 feet of climbing.

Raffy Soriano, in MMCC orange jersey, comes in a few minutes later, after his costly mistake where he misses the right turn into the Castaic recreation area.

The spectators gathered at the hill overlooking the last climb are cheering for them all. 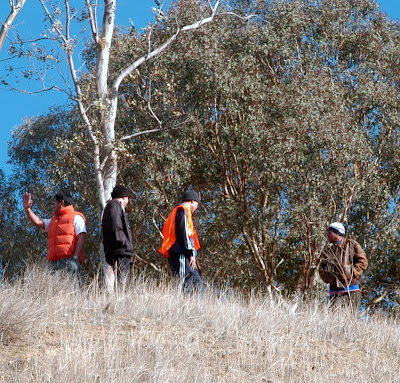 Later, the peanut gallery again gets more gratification as one AdoboVelo rider after another comes uphill and crosses the finish. 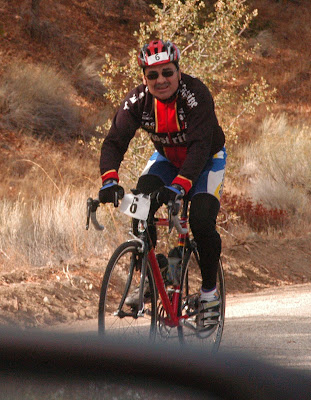 Behind him is an interesting sub-race unto itself: LITO ARALAR is under pressure, so he has taken risks on the long downhill. 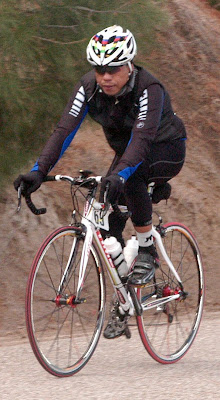 He has been hammering his pedals, approaching speeds of 45 to 50 MPH. He thinks he has dropped the riders behind him before he starts the brutal final climb. But in the middle of the climb, out of nowhere, a pair of riders overhaul him, and take Lito by surprise. It is WILLAM ALIGUE and an unamed rider (We think it's the rider in the lime-green jacket. If that's correct, then it's JAYCEE CARY, bib# 35, a guest of Francis). WILLIAM and the other rider nip Lito! 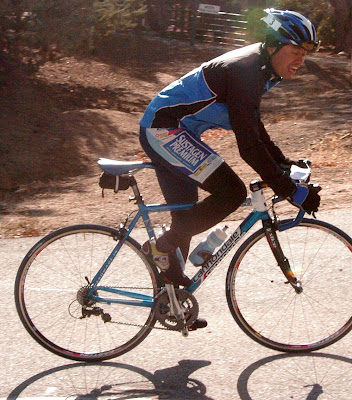 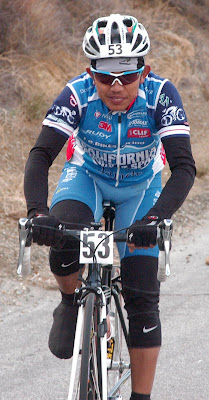 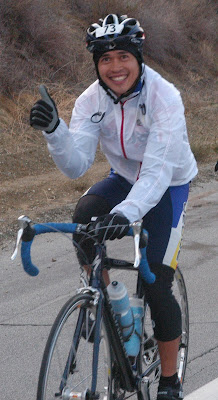 [Oh well, my time is up. I'll attach photos later. Stay tuned for the following Stories in future postings: JASON , the bravest rider; PETE PRIMAVERA who was manifesting hypothermia symptoms at Quail Lake; MANUEL "Maui" REYNANTE the 2-time Tour-of-Luzon Champ; CLEMENT, aged 70; And many more stories from the back of the peloton. Also to come is an article (with photos) that looks back at the very first official Tour de Francis, Dec. 2, 2006. ]