The TdF holds three stages during a calendar year. Stage 1 is held in February, usually at Balcom Canyon on the same day as one of the stages of the Tour of California. 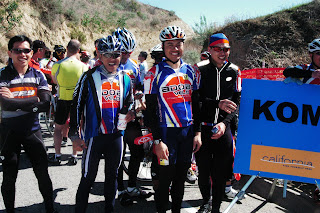 Stage 2 is held in July. In 2007 it was in Big Bear. In 2008 it may be at Frazier Park/Heartbreak Ridge. The name alone strikes terror. 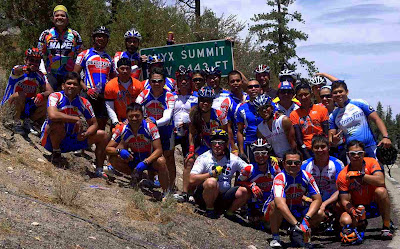 The above photo shows riders atop Onyx Summit in Big Bear, July 14, 2007)
Stage 3 is held in December in Castaic.

The above photo shows the starting line of the December 2006 TdF.
The 2008 season will be the TdF's fifth year since its first whimsical ride in 2004, when it started with a group of 12 riders and one SAG person (who else, Francis), and financed solely by Francis. Now it is a big endeavor that has 3 stages held annually, almost 100 riders representing eight clubs, over 2 dozen volunteers, and the financial support and manpower of the AdoboVelo organization. (AdoboVelo is an American/Filipino cycling club with over 50 members, headed by Pres. Jesse Santa Maria. The Tour de Francis is directed by Tour Director Francis Marlon Ignacio.)

Cyclists love a party. Although a cyclist can ride a bike alone, cyclists prefer company, because misery loves company. It takes a lot of suffering to climb steep hills or go long distances, and the suffering is easier to endure when you're in a pack than if you ride solitary.

That's why cyclists need group rides. They even pay good money to join organized rides that offer food and support. The more organized a ride is, the more expensive the entrance fee.

The TdF is one of the better organized rides, yet it is offered free of charge. (AdoboVelo club members support it financially, and other riders from other clubs do make unsolicited donations to support the ride). Why is it free of charge? Because hospitality is deeply ingrained in the Filipino culture. And they like to throw parties.

The Tour de Francis was a whimsical idea by its namesake, Francis Marlon Ignacio, an accomplished long-distance cyclist who wanted his buddy cyclists to have a taste of the long courses he'd ridden.

In 2004 he plotted a course in Castaic, called it the Tour de Francis, invited 12 cyclists to ride it (including his cycling buddies Allan M, Vince and David Y from the Los Vultos club), and served as the lone SAG support. Thus the TdF was born. In that first ride, only four of the 12 cyclists managed completed the entire route.

(By the way, did you know, SAG literally means "support and gear", and it can be mobile [a SAG vehicle following the cyclists) or stationary (rest stops along the route). To weary cyclists on a long ride, the sight of SAG volunteers is such a morale booster. They provide everything from food, hydration, first aid, mechanical repair, to pickup for tired and injured cyclists.) 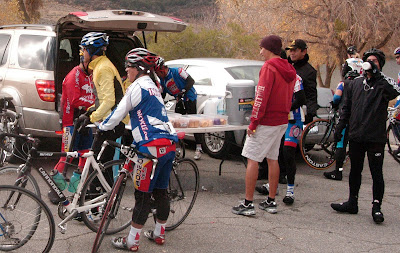 Pictured above: SAG stop at Elizabeth Lake during the Dec. 2007 TdF
With the February 2008 stage just a few weeks away, now would be a good time to look back at last year's February TdF.

Check back in this space as I add photos and comments. 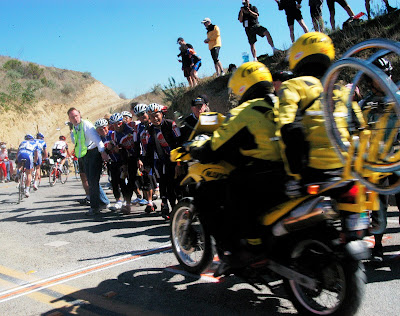 Above: Adobos watch the riders of the ToC cross the KOM line 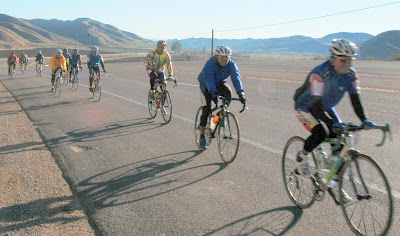 Above: Adobos along Hwy 126 (Fillmore Hwy) 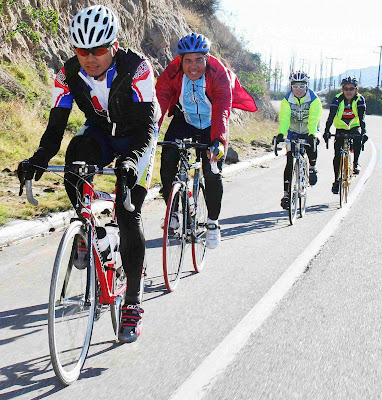 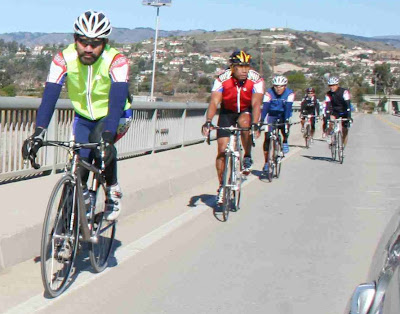 Check back later for more photos and comments on the 2006 February TdF. It is a hard job to pick and upload photos. And my PC is old and slow.