Imagine you go on a trip, and discover you brought the wrong jersey (your wife's jersey, 2 sizes smaller). Meanwhile your team mate has brought 2 wind vests but no jersey. You have had 2 hours of sleep. It is close to freezing temperature outside. 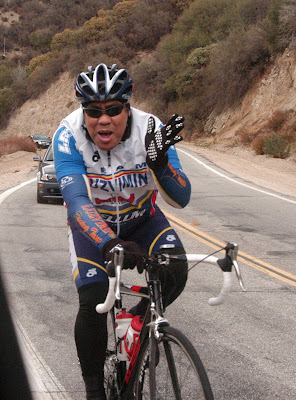 There is no time for breakfast. You are going on a 100-mile bike ride. And you cannot find the starting line. Where is the Tour de Francis crowd? The recreation area covers hundreds of acres.


This is the story of the Siclista and Luzvimin cycling groups, based in Stockton .
PHOTO 1: Pictured at left,
FRANK GATDULA (Luzvimin)
"Kayang kaya, "
"Sisiw , "
"Piece' o' cake,"
"Bring it on! "
he says on Mile# 15 on Lake Hughes Road


In Stockton, it is a Friday, and it's hectic. They hurry up to pack their gear. They are preparing for the drive to their hotel in Castaic. Hopefully, they have not forgotten anything.
The group of seven riders consists of RONALD MAGCAUAS, JULIUS DE JESUS, LEIAN CRUZ, FRANK GATDULA, MAUI REYNANTE, JEFF LANCERO, and ROZEL TUPAZ (alias "Kid Kulaki").


They leave Stockton at 9PM (Friday night). Five hours later they arrive at their hotel at Castaic. It is 3 AM by the time they get to bed. They manage two hours of sleep, or even less because someone popped a DVD of Lance Armstrong in the DVD player and watched some Tour de France (the real one) for some inspiration.

In the morning they wake up and start putting on their respective club kits. That's when they discover that they forgot some things. Kid Kulaki tries putting on his Siclista jersey, but it's too tight! He brought his wife's Siclista jersey . He decides to wear a base layer, and borrows a Luzvimin vest from Frank Gatdula.
Frank himself also mistakenly has brought two wind vests but NO jersey! So he borrows a jersey from someone else.
It is cold outside, 38F. There is no time for breakfast.
They go to the Castaic Lake park. It is a large recreation area, with 2 gates, many parking lots and picnic areas. The TdF crowd is on a hilltop parking lot that is 2.3 miles from the gate! Of course the Siclista/Luzvimin group cannot see the TdF crowd. They go around twice in the park. Finally they see a bunch of riders coming down the hill. Unfortunately, there is. no time for registration, so they decide to join the peloton. The registered riders have helmet numbers and bib numbers and bike numbers. Luzvimin/Siclista have none.

They start at the back of the group, but Kid Kulaki (Rozel Tupaz) feels strong and motivated, and starts to crawl up to the front, passing riders one by one. Finally, he's in the front group. 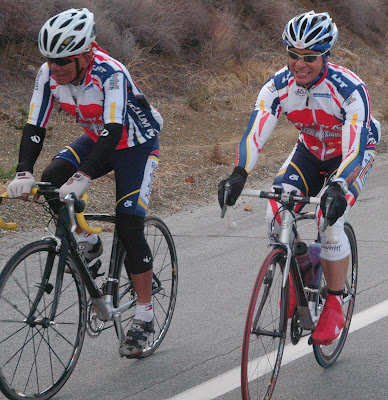 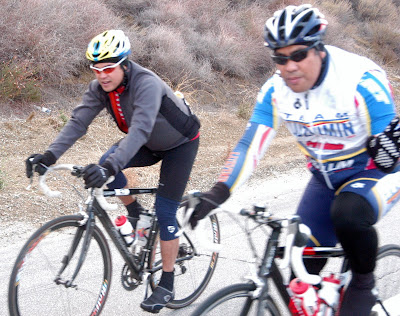 PHOTO 5: (Will upload a new one)
PHOTO 6: Shown below, a Luzvimin rider. Don't know his name. Pls comment 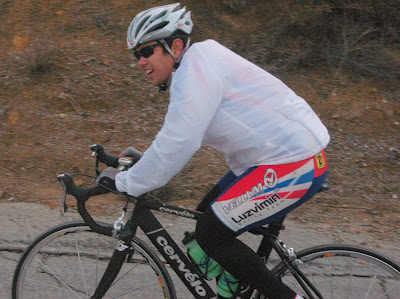 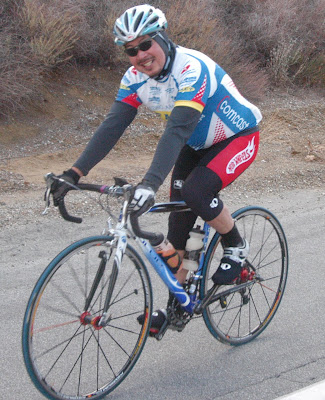 When the leading group gets to the top of the first hill, Kid Kulaki opens an energy bar (his breakfast). The pace is fast, so in process Kid Kulaki drops back a bit, but keeps the front group within his sight.

Suddenly , he sees a pair of riders attack and break away (of course, we now know those 2 riders are Raffy Soriano/MMCC and Keith Brodsky/SFVBC, see previous postings). Kid Kulaki realizes that the first KOM line is almost a mile ahead. He chases them, but Raffy and Keith are very strong. Kid Kulaki comes in third at the KOM, unofficially. It is very unfortunate that he does not have registration numbers.

PHOTO 8(c): Below, the gallant "Kid Kulaki" (LuzviMin)
shown in front, started late, and worked his way to the lead pack. 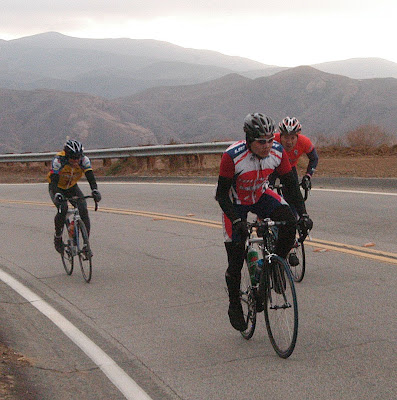 PHOTO 8(b): Below, Kid Kulaki (LuzviMin) comes in "unofficial" 3rd in this KOM. With great regret he is "DQ'd" due to lack of registration. Behind him is Michael Nepumoceno (MMCC) and Roehl Caragao (Fresno FACT) 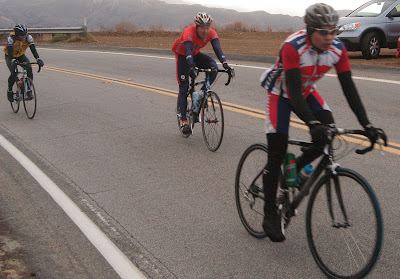 PHOTO 8(c): Below... Sure, this Luzvimin rider is not "registered", but he got here! 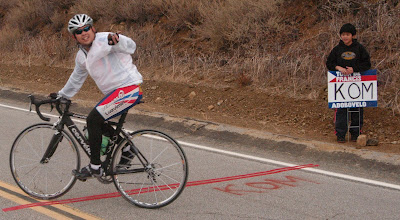 PHOTO 8(e): Below: After the tough climbs in the beginning, here they are coasting along on Mile # 15 on Lake Hughes Road. The rider in the middle wearing the red/gray jacket is from (I think ) Fresno/Northern Calif. On the RIGHT of the picture is JUN GRAPE (AdoboVelo). In the back of the riders is FRANK GATDULA/Luzvimin. 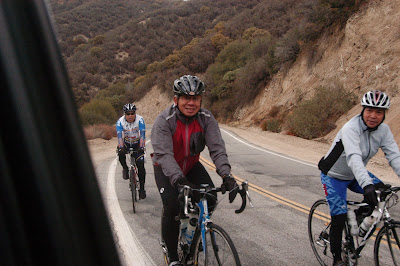 PHOTO 9:
Pictured at left is a Luzvimin rider at the Elizabeth Lake SAG stop.

I do not know his name. If any of you readers know it, please comment. Thanks) 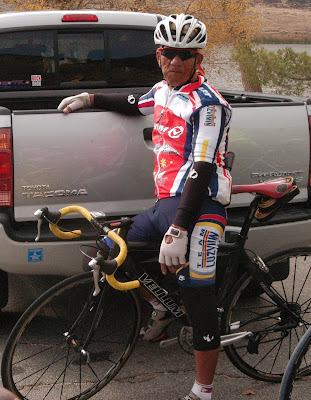 At Elizabeth Lake SAG stop, Kid Kulaki does not notice the leading group leave until it is too late. He gets back on his bike to chase. There's a head wind on Pine Canyon Road. Kid Kulaki gets too lazy to chase them. Then he sees Leian and Ron coming to the SAG stop. He waits up for them. Now the three of them ride together up to the next SAG Stop, Quail Lake at Mile 50.

PHOTO 11: Below, on Pine Canyon on the way to Quail Lake (from Elizabeth Lake SAG stop) are Leian Cruz/Fitness FirstPhilippines, and Kid Kulaki (Rozel Tupaz). They stopped so that Leian could put on more warmers. 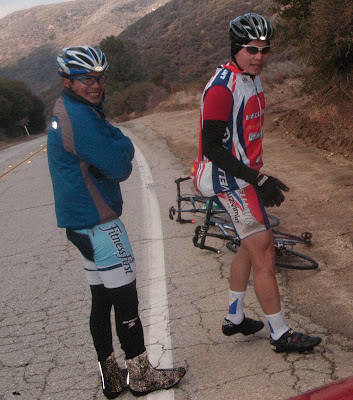 At Quail Lake, the hot Soup is a life-saver. The weather is very cold. They are tempted to cut the ride and take the SAG car, but decide to tough it out and try to finish it. They ride out together.
They have regrouped, so they are together as they wind their way up the first climb from Quail Lake: They are Maui Reynante, Jeff Lancero, Ron Magcauas, Kid Kulaki (Rozel), and Leian Cruz.
Leian is really cold and cannot continue. He takes a SAG car.
KK tries to pull the remaining riders, but only Ron can hang on. They ride together, but it is getting cold. To battle the hypothermia, KK hammers his pedals hard to increase his circulation and body temperature. Ron gets dropped. KK feels a little guilty about it. But carries on and rides solo for a while and passes riders one by one. Kid Kulaki, Ron Magcauag, and Maui Reynante finish the ride. Kid Kulaki's computer logs 98.9 miles, in a time of 6 hours, 33 minutes.
At the picnic they are presented with a plaque of appreciation for coming all the way from Stockton/Fresno to participate.
This is what Kid Kulaki wrote on their blog: "I will present [the plaque of appreciation] at our XMAS party. All I can say is that they did a great job organizing the event. It's perfect. There's a lot of SAG cars, Volunteers, FOODs, WATER, Gatorade, BANANAs, Photographers, and cowbells. ... Thank you ADOBOVELO. It's a great event. We love it!"

Great account of an amazing ride! TdF was one of my favorite events ever on a bike. Cheers!

On Photo #7 is Tito Geronimo of the Fil-American Cycling Team of Fresno, CA.