It was a thrill and honor having Manuel "Maui" Reynante ride AdoboVelo's Tour de Francis. 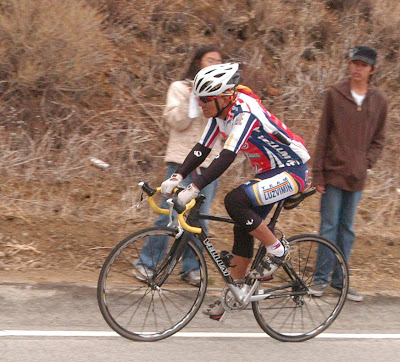 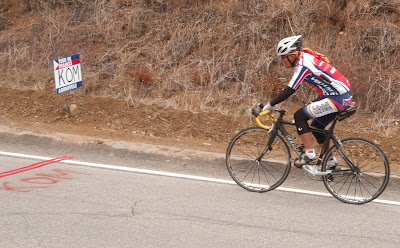 Manuel "Maui" Reynante twice won the Tour of Luzon (Philippines' cycling stage race) in 1977 and 1980. He now lives in the San Francisco Bay Area, and rides with the Luzvimin club. (For those readers not familiar with the term "Luzvimin", it stands for the 3 main islands in the Philippines, namely, Luzon, Vizayas, Mindanao. The Philippines is an archipelago of 7,000 islands.) Maui also races various rides in the Masters category.

(If any of you readers wish to add more information, we welcome it. Just email normgen@gmail.com. Or you can add comments by clicking the comment link at the bottom. No login or password needed.)

The photo below shows the Tour of Luzon riders go up Kenon Road in Ilocos province. This is where the King Of the Mountain competition takes place.

Below, a tricycle driver watches the peloton. 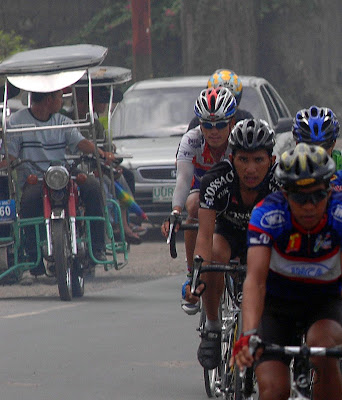 The Tour of Luzon was launched in 1955 as a four-stage race from Manila to Vigan (an ancient town established by the Spanish, with very old churches made of adobe stone). The next year the Manila Times newspaper took over, renamed it Tour of Luzon, and increased the number of stages. The tour helped increase newspaper sales. Famous riders in that era include Pangasinan riders CORNELIO PADILLA, JESS GARCIA (both 2-time champs), and JOSE SUMALDE of Catanduanes. No tours were held in '68, 70, '71, 72.

In 1977 a rift led to the holding of two tours that year, one of which was won by Manuel Reynante (his first win), and the other by Jess Garcia (his 2nd win). Reynante won again in 1980. In the years 1977 to 1981, the tour's name changed yearly, reflecting different sponsors and the instability of the sport at that time.

Photo below shows riders going through one of the towns along the flat stages.

In 2002 and to this day, FedEx (the air freight company) sponsored the tour under various names.

One of the more memorable Tour victories was a win in 1987 by a cigarette and fishball vendor from Valenzuela named REYNALDO DEQUITO.

In 1991 the race was eerily similar to American Greg Lemond's come-from-behind win in the 1989 Tour de France. In 1991 BERNARDO LLENTADA trailed CARLO GUIEB by 46.12 seconds going into the 17th and last stage, a 32-km race-against-the-clock along Roxas Blvd. Llentada rode a never-before-seen aerobar and a disc wheel, and won the Tour by one-minute and 30.48 seconds over Guieb. Guieb won it two years later, and the year after that.

In 1997 when the tour was recognized by the UCI for the first time, cyclists from all nationalities were allowed to compete. A Hong Kong national, Wong Kam Po won it. Also, UCI rules were enforced for the first time, and the public was mildly amused at what it thought was a strange penalty against a rider: The violation was for urinating in public, a rule used for the first time at the Tour of Luzon. Riders from other countries complained of the bad rural roads, forgetting to note that even the Tour de France held stages on unpaved (gravel) roads. 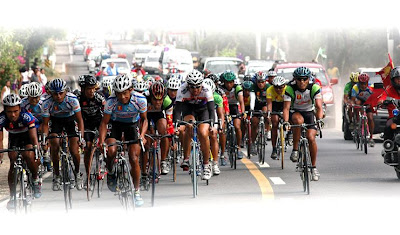 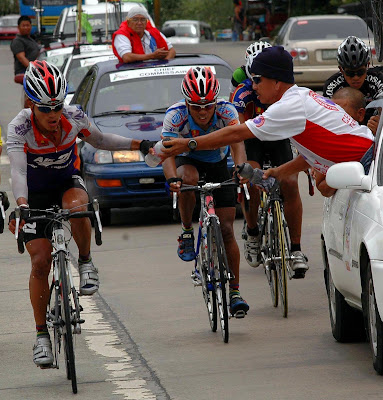 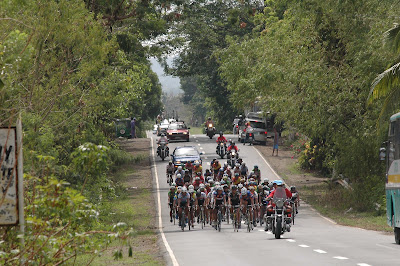 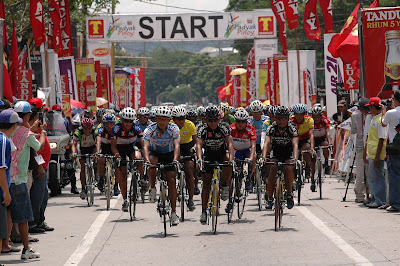 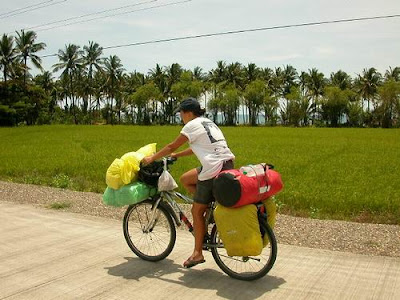 Summer in the Philippines is not complete without the peleton, dubbed as "Tour of Luzon" or "Tour ng Pilipinas". Growing up in small town waiting for the to pass by on summer time. Names from Estrata, Bonzo, Sicam, Rivas, Salamante, Benavidez, Reynante..... they are part of summer time in the Philippine sports.

Carlo Guieb's back to back championship in 93 and 94 should be ranked as one of the greatest achievement not only in Phlippine cycling but in Phlippine sports as well. In 1993 he bested Renato Dolosa and Loreto Mandi who at that time were having some kind of rivalry, en route to his first championship. He did this by attacking in the Baguio stages of the tour. More dramatic, however, was his victory in 1994. Down a few notches in standings, and trailing Placido Valdez IN THE ROAD for more than almost thirteen minutes, Guieb made a remarkable run, eating up on Valdez minutes and eventually catching up on him on the road to Baguio (sabi ng iba, dun daw sa may leon inabutan). The succeeding Baguio to Baguio stage (the killer lap) and the Pugo to Baguio stage catapulted him and cemented his hold to yellow jersey en route to his second championship.

Thanks for such a great info on Maui. I remember those times in the '70s when my amateur cycling friends and I were training every afternoon along Roxas Blvd (Dewey Blvd). Maui used to hang out with our group. He was a very respected pro cyclist (among others, Sumalde, Etrata, and Moring)among us. Maui loved to share his experiences and gave us advise on how to improve ourselves. I remember Maui as a cool-headed guy for his actions in preventing a potential shoot-out between one of our cyclists, I was riding with along Roxas Blvd, and a car driver. This driver was the cause of a massive pile-up when he opened his car door without first looking for the fastly approaching cyclists from his rear. It would have been a big tragedy if not for Maui who restrained the angered cyclist with a pistol.

In the early 70's I met Jess Garcia Jr. with 2 of his protege coming from Pangasinan. I was an aspiring amateur cyclist dreaming of going to the olympics then. We (Castaneda, Dinio, Manalo, among the many trying to catch up with these 2 proteges) raced against this guys at a dirt oval track in Astro Park outside the fences of US Clark Air Force Base. I remember Jess Garcia telling us to train in a sandy beach to strengthen our legs and most of all eat corn with rice everyday. I still ride, week ends, with a Christian Cycling Club, New Beginning Community Church and have logged in a couple of hundred miles on easy and fun pace. One of our cyclers told me about Jess Garcia's son visiting San Diego CA and rides occassionally with the Mira Mesa Club. I still have to meet the guy though. Anyway, keep on pushing the pedals.

In the mid 70's, I met Jess garcia Jr. with a couple of his proteges coming from Pangasinan (could not recall if they were the Mandi's and Pagarigan's). We raced these guys in a dirt oval track outside the perimeter fence of US Clark Air Force base. We tried our best to catch up but to no avail. I remember Jess Garcia saying to us that we need to train on a snady beach to strengthen our legs and eat a lot of corn with rice(diperensiyang mais lang yan). I was an aspiring amateur cyclist with hopes of going to the olympics but due to lack of finacial capabilities, I had to let go of the dream and joined the military instead. I still ride on week ends with a Christian Cycling Club, New Beginning Community Church. We have logged on a couple of hundred, fun and easy paced, miles. One of our fellow riders mentioned to me that Jess Garcia's son visits San Diego CA for business and rides occassionally with the Mira Mesa Club. I have not met him yet though. Well, keep on pedaling.

Sir Maui, you're the great person I've ever met...You are so very humble guy!

i have read all the names of the Champions and the year they won.. it's also interesting to know where they came from too ( what Provinces ). It is also a means how to locate them and maybe there are those Tournaments held every summer where they can be invited... if the Government has no worth of recognizing them, then at least somebody might be interested to have one of then as Guest Speaker because i believed they deserved to be recognized for their great experience and achievements and especially to share words of encouragement to the youth.

i was named after YOU sir MAUI. my dad was a cyclist as well.thank you for your discipline and a good display of life .