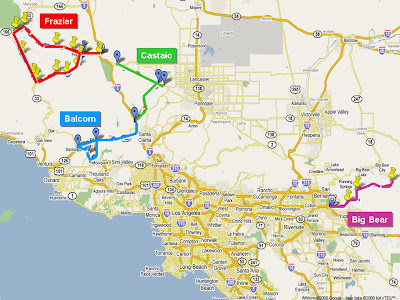 WHY DO WE DO THIS? It's a question my relatives and friends always ask. We all have our own personal reasons.

The beauty of the Tour de Francis is that it brings all levels of cyclists together in one epic ride. The Tour de Francis has a reputation of challenging (actually, "brutal" is a more apt description for us mere "weekend" athletes).

Nothing is more satisfying than a hard-fought "victory", whether it's (A) finishing among the front, or (B) being in the middle but besting someone else in a "mini-race", or (C) being in the back but besting your own personal record, or (D) the entire ride being on the brink of quitting, and simply just willing yourself to the finish line after utterly depleting your physical and mental reserves.

In that sentence we just described 4 kinds of accomplishments, 4 kinds of cyclists, all equally deserving of recognition.
There were riders way in the back who had big smiles, despite the suffering, because they knew the enormity of their accomplishment.

And in the middle, we witnessed riders in groups. Each group was its own mini-race. That was fun to watch too. 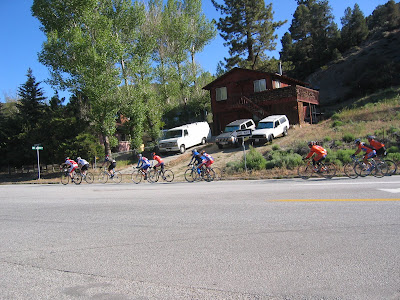 Then there were the top athletes. To make it simple, let's consider the 4 front runners we witnessed racing to the top of Heartbreak.

Deo and Raffy reached the top together, mano-a-mano. 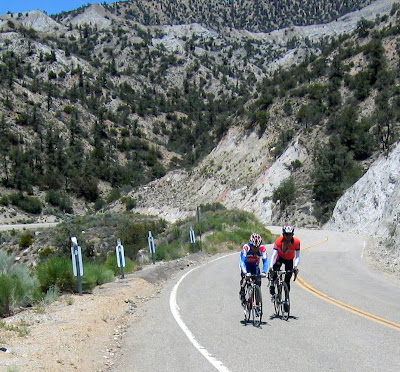 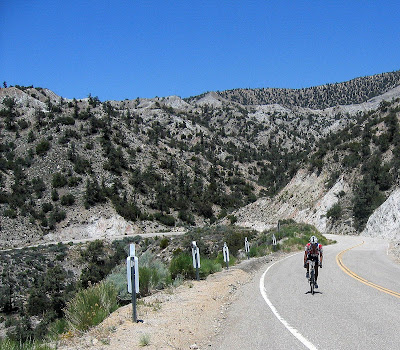 Following him was Henry (45 secs, but my camera jammed, sorry Henry) and "Agent Al" 4 secs later (I think that's him. If I'm wrong someone will let me know), then Glen, Mike, Reggie. 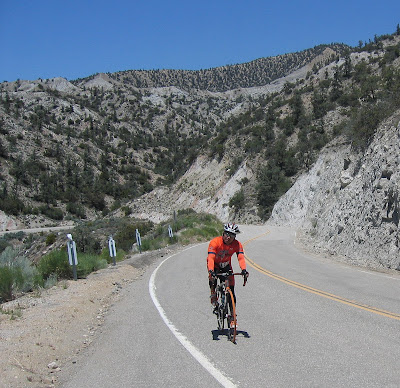 Being a top athlete like those guys requires 2 things: "potential" and "training".

Potential is something you're born with, e.g., naturally high hemtocrit (red blood cell count), low resting heart rate, large lung capacity, etc. Training is your plain hard work. It is what separates you from another person with exactly the same natural potential; The one who trains more, wins. The one who trains less, does not reach full potential.
The photo below is the elite group on the way to heartbreak. Notice the "Orange Crush" (those MMCC jerseys, they always come out to play!). In this elite group were 4 MMCC (Raffy, Reggie, Al and Mike), 3 Adobo (Deo, Pete and Henry), and 1 Sta Clarita (Glen Berdin). 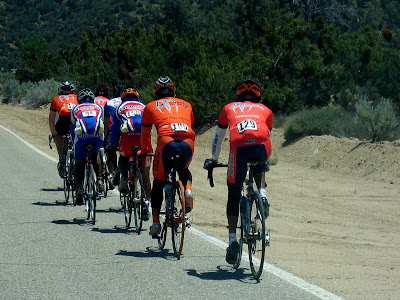 Here below, Pete was trying to put a time gap before reaching the hills. Deo and Raffy pulled him back. The rest in that lead pack were Henry, Al, Mike, and Glen. 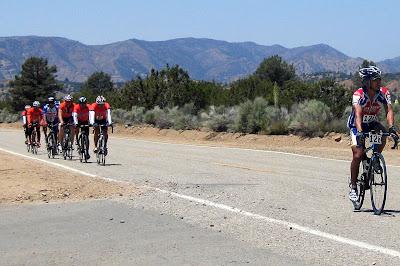 Those riders who raced to to top of heartbreak were simply awe-inspiring to watch. They were born with "potential." But that's not enough. If you don't train, you don't achieve your destiny. These top athletes trained hard to acheive their full potential. We must give them props.
15 miles prior to hearbreak, at mile 54 (pistachhio store) the lead group took a break. 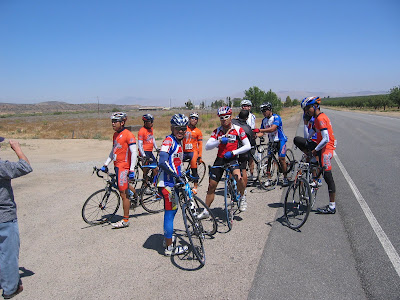 They's still laughing and joking. Not all of them joined the heartbreak breakaway. 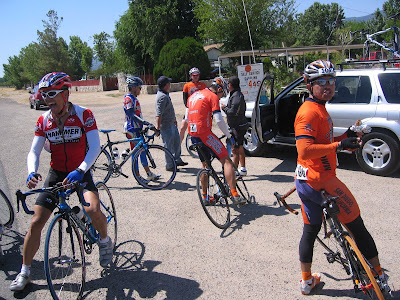 For "edutainment" let's digress a little bit on the topic of hematocrit (red blood cell count). In case you were absent from biology class that day, Red blood cells carry oxygen. The more you got, the easier it is to deliver oxygen to your cells. Reference range for hematocrit is 30 to 50, meaning, if you have 30 or lower, you are seriously anemic, and if you have 51 or more, you are automatically suspected of doping.

In truth, there are people who naturally have 51 or higher hematocrit. My own brother Jordan has 51 hematocrit, smokes Marlboros. I train twice as much and don't smoke, and I'll still lose to him going up Glendora Mountain Road (10 miles, 5% avg gradient) because my hematocrit is a crummy 38, and my resting heart rate is too high at 80 BPM. That's really lousy "potential".
So you see, you need "potential". You also need training. Jan Ulrich (one of my fave cyclists even to this day) had greater potential than Lance (another fave). But when Jan was night-clubbing and getting fat in the winter, Lance was training in the Alps. The results speak for themselves.
If you don't have "potential", you can raise it artificially (illegally) by doping. As you all know, dopers can raise their hematocrit by either taking EPO (a wonder medicine for recovering cancer patients whose RBC is depleted from chemo), or taking blood transfusions.

Either way, if done improperly, it can result in your blood getting too THICK. Guess what happens when blood is too thick: It's harder to pass through the veins, so the heart has to pump extra harder. That's like your heart working as hard as if you were climbing GMR, while you are asleep. That can result in death while you're asleep.

Unsupervised dopers who overdose on EPO have to take HEPARIN ( a blood thinner) when they feel their blood getting too thick.
Anyway, back to the topic of the four kinds of cyclists at the TDF. So let's say you have only average potential (or crummy, like mine).
No problem.
We can still make it fun. Whatever you are, whether it's top athlete, average, crummy, or barely making the cut-off time, you should carry on anyway. Train to reach your full potential, whatever that level is.

The TDF is there to TEST and CHALLENGE you. When the TDF is on the calendar, it makes you get up in the morning to train even in miserable weather. It makes you put in the miles.

It makes you pimp up your ride. It makes you come to the parking lot to join other cyclists for the camaraderie.
And in so doing, you achieve personal growth.
"The key to climbing a mountain, is to watch the pretty flowers along the way." Francis said that (in Tagalog) while we were climbing Angeles Crest Hwy in April. I wasn't sure what he was talking about. I didn't see any flowers. One of these days he will tell us what he means.