Century rides getting attention in the New York Times 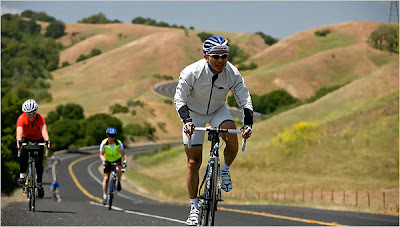 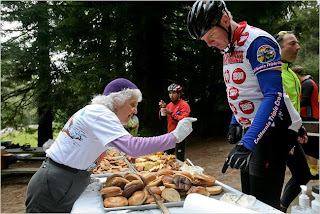 There's a May 2008 New York Times article on century rides in Northern California.

An excerpt... "Over the years the refreshments served by century ride organizers at rest stops have become a source of heated competition. Some rides are epicurean, some are organic, some offer complete feasts, and at the bottom of the heap are the rides that provide the meager PowerBar and Gatorade."

More excerpts... "You can take all day to ride a century, or you can ride it like a race. There is always a crowd that rides at “race pace,” and it’s fun to hop on the back of a pack of 10 or 15 riders that comes buzzing by at 20 miles an hour or more."

"As you get older, the hardest part of riding centuries is getting going again after standing around for 20 minutes."

There's also a May 2008 New York Times article on L'Etape ("The Stage"), an organized bike ride (open to the public but you have to pay) using a route on an actual stage of the Tour de France. Here's an excerpt: ... "the organizers of the Tour de France are kind enough to allow anyone with a bike to take a shot at riding the whole length of a single, mountain stage during each year’s Tour. This annual event is actually a timed race called "L'Etape", which sets 8,000 cyclists loose on one of the hardest segments of each year’s course, just a few days before the actual Tour de France."

Here's an excerpt... " the man they call ‘the father of the mountains’ recconnoitred the Tourmalet by car (in 1910, almost a century ago). Halted by a snowbank at 6pm (and still 4 km below the peak), he told his driver to head back. Then, in his town shoes, he set off alone on foot, following the poles marking the road under the snow. Night fell. He slogged on to the gendarmerie in Barèges and, when he had recovered, telegraphed Desgrange (the Tour Director) in Paris: ‘Tourmalet crossed. Very good road. Perfectly practicable. "

"The first man across the col in 1910, Octave ‘Curly’ Lapize, walked part of the way. Half an hour behind him came Gustave Garrigou, (winner the following year), who didn’t dismount once."